Lots of tributes to Ballard yesterday & today at Ballardian, including this one from Michael Moorcock.
Posted by Lara Buckerton at 02:45 No comments:

Grief straight from the bucket

Dominika Oramus, Grave New World: The Decline of the West in the Fiction of J.G. Ballard.

Grave New World presents an ambitious and rich account of Ballard's ouevre, tracing a handful of themes (apocalyptic social implosion, war phantasmagoria, pathological boredom, the Death Drive, the dialectic between mental and physical landscapes) from The Wind from Nowhere, Ballard's 1961, strapped-for-cash brain fart debut, through his early science fiction in its various engagements with New Wave and other avant-garde contexts, his postmodern memoirs, all the way through the recent paranoid fables up to and including Kingdom Come (2006). Not unusually for a book foreshadowed by academic papers, there's a fair amount of repetition, but it's no bad thing -- it means you can generally dip in and pick up the thread fairly quickly.

Oramus has a go at jigsawing her chosen themes into the underlying & unifying core of Ballard's work. I query not whether she succeeds but why she bothers -- whether or not Ballard's work possesses deep invariances, it is certainly superficially various, and any sharp reader will be as interested in the variety as the core. More useful than those monopolising conclusions are the early chapters, which summarise major critical approaches to Ballard's work and supply potted introductions to the theorists who most inform it (Nietzsche, Spengler, Jung, Fukuyama . . . the list goes on!). Grave New World might have paid a little more attention, in this section, to the Marxist heritage of several theorists (Debord in particular comes across as Baudrillard's, sort of, squire), as well as to the ways their ideas have been received and challenged in recent years. "The represented world seems more real than the world outside of pictures" -- this supposed to be, like uh, a newsflash? In justice, Grave New World only wants truck with such theory for what it can illumine in Ballard's work, but here again the book misses a trick. Ballard is an extraordinary storyteller and poet (as soon as any study of him immures sufficient quotation, & Oramus does, that becomes clear). Inasmuch as Ballard's work also performs expositions and criticisms of contemporary Western society, it exists in the tension between, on the one hand, accuracy and lucidity, and on the other, what makes a good story. Taking it seriously should also mean trying to work out how true its ideas are; that means situating them in intellectual traditions in which they are unpopular.
Posted by Lara Buckerton at 01:59 No comments: 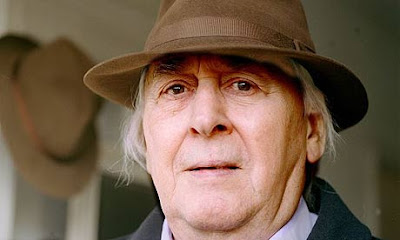 Last night I heard (faintly, on the woman upstair's radio) that J. G. Ballard has died. Ballard wrote The Atrocity Exhibition, Crash, Empire of the Sun and many brilliant others. In a way, the police killed him too.
Posted by Lara Buckerton at 04:03 3 comments:

Rather good post from Posie Rider yesterday about this article, and more generally a whole genre of lazy, "adaptationist fallacy" journalism that seems depressingly prevalent these days.

I don't have time to rant about the science -- I'd probably be very witty if I did, I can't help it! -- but very quickly: (1) if the male Autumnal years were infertile, you can bet your barren ballsack there'd be research claiming that strong, wise, grandfathers guarding our little H. erectus litters from antique wolves, falling into tar pits etc. were a vital evolutionary adaptation, the "Butch Sage Hypothesis"; (2) sleaziness sensus strictus is a phenomenon of modernity; and (3) if we accept the normative tone of this hearsay at face value, some of the other things that are "good" for the species would be no age of consent for women, a hoary-whorey age of consent for men, no laws against rape, and totalitarian eugenics! Mmm!

P.S. Posie has a very funny picture of a eugenics tree.
Posted by Lara Buckerton at 03:31 No comments:

Links to sites about some of my favourite authors:


These are my favourite "speculative fiction, science fiction, horror, fantasy, children's, slipstream, magical realist, fabulist, modernist, postmodernist, maximalist, new weird, avant garde and bizarro" authors. Even for that catch-all Chandler is a bit of a cheat, but I think Marlowe may be an android. Watch out for Dorn, Sondheim, Siratori, Prynne and Katko, they're (sorta) poets! I didn't mean for my list to include important people I haven't read or don't really go in for, like Arthur C. Clarke and Isaac Asimov. I quite like Asimov's mysteries and the list of all the books he wrote. Must get on.
Posted by Lara Buckerton at 03:23 No comments:

The new issue of The Dream People is out, including my review of Gina Ranalli's most recent book.

Did that really require five links. Must eat something today.
Posted by Lara Buckerton at 11:46 No comments:

My pledge has doubled in size! Hurry everyone!
Posted by Lara Buckerton at 07:54 No comments:

A zombie reflects on the riots

I've heard a lot lately about how the police have been pepper-spraying themselves in the foot, so to speak, with their heavy-handedness, their beggars-belief distortions of the meaning of "terrorism," and their choice of tactics which indiscriminately punish, intimidate and often physically hurt criminal and non-criminal protestors alike. I think all this risks missing the point.

What is the point, Lara? Oh my evaginated purple dole! Let me look in my points bag. The point is not that the police make it more difficult for themselves to distinguish legal from criminal protest. It is not that they indirectly cause criminality (with provocation hovering on the edge of entrapment), for nebulous payoffs. It is not even that they stray into criminality (a kind of "salami slicing" grevious bodily harm throughout the day).

Yes, it is vital to protect the conditions for peaceful protest! But for the suffragettes, the point was suffrage, not the right to protest about it. And the point for the demonstrators this week has been global social and ecological justice.

Global social and ecological justice, of course, has broad appeal. We can all agree about it, just as we can all agree (more or less, eventually) that riot police should have better guidelines, training, forward information and purer hearts, so as to not kick and club people so much (I am probably being too soft on them. Ladies and policemen have long been natural allies, and try on each other's hats).

I think that superimposed upon the various political divisions in Europe -- progressive vs. conservative, Left vs. Right, etc. -- there is a division between what you might call the "constitutionalists" and the "essentialists" (I need better terms! -- dammit my jargon team are all in Strasbourg this week).

I think I am a constitutionalist.

Constitutionalists must beware of the cheap solidarity -- and the infectious fun! -- of agreeing with everyone else that Sir Fred Goodwin's pension is outrageous, or that riot police need to up their game. These are positions which can quite easily be held by essentialists who nevertheless do not question the laws, and other systems, which will inevitably and periodically generate atrocities about which we all can agree! A false consensus, in other words.

If Sir Fred were a constitutionalist, he'd make a perfect spokesperson for the anti-Capitalists (or at least for the not-so-sure-about-Capitalismists). He could make the case that it really is unfair to single him out from the many equally underserving hyperrich, just because he wandered into some limelight whilst justice was on the agenda.

Instead, gallant Sir Fred would say, we should work together and concertedly for the laws which abolish the hyperrich altogether, so we can concentrate on what's really important: love, laughter, sex, beauty, adrenaline, and ploading our consciousnesses onto needles of dense computronium shanking at near-light-speed towards the stars which I do not hesitate to characterise as motherfucking.