There are these two fairly good jokes they always tell at the Edinburgh Free Fringe, and the one is about how it's free to get in to see the show but not free to leave, and then the other one is something about, "blahdy blahdy blah, boop boop boop, fold your donation into this hat [or bucket]." Well I have busy since mid-May with my little jeweler's saw and soldering iron and pathetic kleinen hinges, crafting my foldable tuppence to perhaps fuck up that latter gag for keeps, and tonight I finally went along to Hoke's Bluff at the Forest Fringe (huorned over to the Out of the Blue Drill Hall, goodness) to debut my devious little comeback, and do you know what -- I had to give them a bloody fiver!

Yes, cast and crew of Hoke's Bluff: the fiver was from me.

Now I can't really do a proper review, but here are some discombobulated notes.

Hoke's Bluff is a play about sports, and perhaps particularly American high school sports, and perhaps particularly especially about movies about American high school sports. There is a jock, a cheerleader and a ref. There is a lot of poppy dance music, and lots of getting the audience to cheer and clap. They sell you popcorn and then make you feel guilty about eating it by running up and down and doing star jumps.

The sport in question is a sort of excellent synthesis of American football, baseball, basketball, ice hockey and soccer, in roughly that order of precedence, but really we all know it's Calvinball: 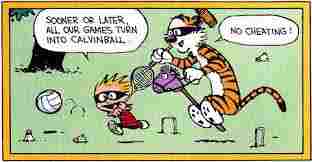 As well as Bill Watterson, it's reminiscent of Don DeLillo: Americana and -- especially! -- End Zone. There was that sense of sports talk (commentary, smack talk, pep talks, etc.) as being its own proper oral tradition, with its own integrity and complexity. It wasn't just that the beautiful writing of Hoke's Bluff had transmuted sports talk into poetry -- yes, that happened a bit, but sports talk was also allowed to be whatever it already is when it is fully, extravagantly realised. Something akin to poetry, perhaps. The sister arts: ut playbook poesis.

It is a crackerjack series of beautifully staged little spectacles. Detail, yes! And there was a steadiness to it, a confident occupation of attention which left me with the impression of the characteristic pacing of sketch comedy. Processes which sound like they should be boring to watch instead became the milieu in which little well-chosen details continually shifted.

Given the deliberately archetypal and somewhat fragmentary storytelling, the characters conveyed a surprising richness.

The artifice is so bright and straightforward it almost feels as if it is handed back to the audience to control. Feelings can operate more like thoughts: you can move around in feeling, choosing different branches, like you can move around in thoughts. (Although a film like Christoffer Boe's Reconstruction (2003) shows that drawing attention to a trope does not necessarily significantly change its emotional impact. (Perhaps it's different with Hoke's Bluff because when it comes to cheesy sports movies, we're already used to suspending disbelief in some particular way?)).

Something else about Hoke's Bluff -- something about its hyperreality -- means if we choose to feel with the grain, we probably won't be distracted by the falseness, by tropes constructed to create a certain feeling. It is false here, but it's true somewhere. (Perhaps this is peculiar to small town sports obsessions).

You know that hokey gag where an orator -- coach, say -- gets carried away in a speech supposedly about general and noble things, and inserts various personal hang-ups and/or uncomfortably intimate information? (I'm not sure if it really is a gag. It's seldom funny). Something like that happens in Hoke's Bluff. But the movement is not always from the general and proverbial to the specific and private. It is another mode of oversharing altogether.

These epic lists! The names are funny, sometimes. There's that Chris Morris-y way of creating names. (I don't know, maybe they were all real). Is this perhaps the counterpart to Romantic irony -- to that sense that anything could always have been otherwise? A kind of Romantic bathos, or something? I don't know.

relationships. Much of this has for you to do with one’s very own conviction to control his or her craving to gamble. Unlike the early days, growth regarding technology in general and the web specially
asikqq
dewaqq
sumoqq
interqq
pionpoker
pelangiqq
hobiqq
paito warna terlengkap
syair sgp
datahk